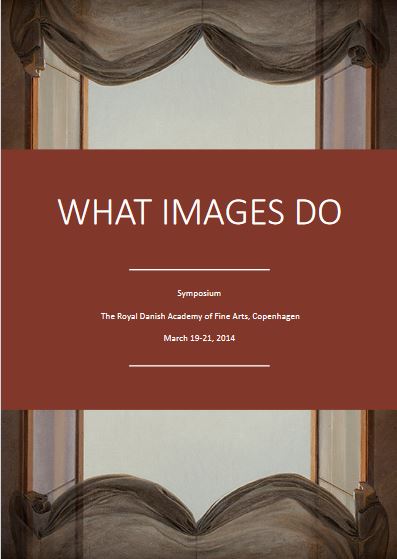 The aim of this symposium is to contribute to our understanding of what the image does (its pragma). The awkward entanglement of being and non-being (Plato) calls for an examination of the image as an act or event. Through its event, the image-act instigates an image-related reflection upon the issues of being and non-being, physis and semiosis, actuality and potentiality. The concept of iconic difference as coined by art historian and philosopher Gottfried Boehm is vital to our concern. Iconic difference embraces an internal effect in the formation of images as an entanglement of being and non-being, matter/perception, imagination/representation, but also externally in the relations between images, language, and concepts. Today, educational institutions within the fields of art, design, and architecture may no longer simply approach image making intuitively, but are requested to engage in a dialogue with academic research and science. Such primarily verbal discourse may, at best, support rather than suppress insights into the unique potentials of the image. Yet a prolific dialogue would not sustain the identity of the image as an already established reality (as re-presentation), but moreover articulate the particular behaviours of the image.

WHAT IMAGES DO follows upon the work of an international research network established in 2012 in collaboration between NCCR Iconic Criticism `eikones´ in Basel, TU Delft, Kunstakademie Düsseldorf, and The Royal Danish Academy of Fine Arts. The network and its activities are funded by The Danish Council for Independent Research, Humanities (FKK). Talk by Katharina D. Martin: White Wall and Black Hole: Micropolitics of the Undetectable Face. Keynotes speakers: Georges Didi-Huberman, Jonathan Hay, Jacques Rancière.